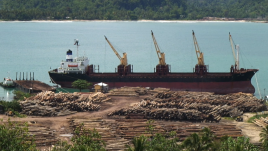 Bikpela Bagarap reveals the human face of logging in Papua New Guinea. The story is told through the voice of regular villagers, without narration. It is a tale of exploitation and broken promises, where local people are treated as second-rate citizens in their own country by Malaysian logging companies and corrupt politicians.

Customary landowners are forced into signing documents they don’t understand, for the promise of “development” – fresh water, health and education, but these essential services are rarely provided. Instead, their traditional hunting ground is destroyed, waterways polluted, and their way of life ruined forever.